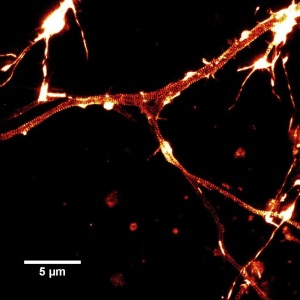 These stains allow you to stain actin and tubulin in living cells without the need to transfect cells – as I described in my previous posts on these tools:

Today, I invite you to take a look at the brilliant results users of the stains have obtained. Some of them have already been published during the past months.

One of the most recent publications using SiR-Actin comes from the lab of the Nobel price winner Stefan W. Hell, who is one of the directors of the Max Planck Institute for Biophysical Chemistry in Göttingen, Germany:

By using STED (stimulated emission depletion) microscopy, Hell’s group could visualize the periodic subcortical actin structure in axons and dendrites in cultured hippocampal neurons. These results were obtained by staining Actin with SiR-Actin.

Another recent paper even brought an image of HEK293 cells co-expressing CaVβ and CaV1.2 L-type calcium channel and stained for actin filaments using SiR-Actin straight to the front cover of the respective JBC issue.

The group around Patricia Hidalgo at the Institute of Complex Systems in Juelich, Germany, could show that the β-subunit (CaVβ) n of cardiac L-type calcium channels associates directly with actin filaments – again SiR-Actin was successfully used to get these results.

Videos showing the use of SiR-Tubulin

As SiR-stains are very photo stable and do not show toxic effects, even in long-term incubation, they are excellent tools for visualizing biological processes over time in videos.

Results provided by our customers

We would like to thank all the users who provided the pictures and results!

And of course, we invite all researchers who would like to test the SiR stains in their laboratory to contact us through the form sheet below.