Several compounds are known as modulators of these pathways and research fields and can be used as useful tools to study and characterize specific steps. Nonetheless, it is quite time consuming and expensive to order all these chemicals from different sources. Targeted compound libraries represent a convenient alternative.

How to monitor mitophagy in mammalian cells Mitochondria keep cells “healthy” in their environment. In this post, we’ll take a look at a new fluorescent assay for the monitoring of mitophagy, a process aimed at clearing damaged or superfluous mitochondria by autophagy, in mammalian cells. Cell death can be caused by external factors such as infection or trauma – a process which is call necrosis. On the other hand, cell death can be mediated by intracellular programs – in this cases we talk about programmed cell death.

What are the different types of programmed cell death?

When we talk about programmed cell death we usually think of… 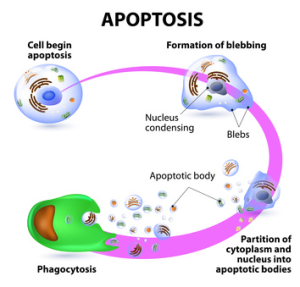 The induction of apoptosis leads to characteristic cell changes and finally to death (see How to measure early apoptotic events). These changes include blebbing, cell shrinkage, nuclear fragmentation, chromatin condensation, and chromosomal DNA fragmentation. Furthermore, changes affecting the membrane, nucleus, cytoplasm, and mitochondria occur. Apoptosis involves a complex cascade of reactions regulated by specific proteases called caspases (see Caspases as pharmaceutical targets – how to screen for inhibitors?), and results in DNA degradation. Apoptotic processes have been researched in an extensive variety of diseases. Excessive apoptosis causes atrophy, whereas an insufficient amount results in uncontrolled cell proliferation, such as cancer.

Another quite prominent type of programmed cell death is represented by…

Autophagy describes the fundamental catabolic mechanism during which cells degrade dysfunctional and unnecessary cellular components (see How to manipulate and measure Autophagy). This process is driven by the action of lysosomes and promotes survival during starvation periods, as the cellular energy level can thus be maintained. During autophagy autophagosomes are generated, organelles which are surrounded by double membranes and which contain the cellular components to be degraded. The autophagosome formation is induced by class 3 phosphoinositide-3-kinase, Atg 6 (autophagy-related gene 6) and ubiquitin or ubiquitin-like modifications of the target proteins. Subsequently, autophagosomes traffick through the cytosol of the cell and finally fuse with lysosomes to form an autolysome. After this fusion the cargo is degraded by lysosomal hydrolases. Excessive autophagy leads  to cell death – a process which can be morphologically differentiated from apoptosis.

But there are less known types of programmed cell death, such as… 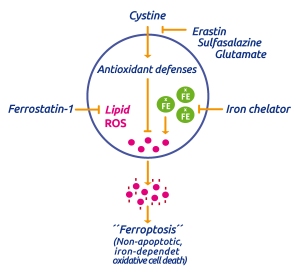 This process is triggered by an iron-dependent accumulation of lethal ROS in cells. It can be induced by e.g. erastin which blocks the cellular uptake of cystine and thus blocking the intracellular antioxidant defense mechanism by limiting the production of intracellular glutathione (GSH), the primary cellular antioxid. ROS generation is iron-dependent as its accumulation and cell death can be supressed by the iron chelator deferoxamine (see Ferroptosis – and the way to inhibit it).

Necroptosis is indeed a programmed form of necrosis. As in all forms of necrotic processes, cells break open and leak their contents into the intercellular environment. In contrast to necrosis, leaking of the membrane during necroptosis is regulated by the cell. Necroptosis has been well described as a non-apoptotic “cellular suicide” process which represents a viral defense mechanism. Moreover, it plays a role in inflammatory diseases such as pancreatitis and Crohn’s disease.

Tools to differentiate between Apoptosis, Necroptosis, Autophagy, and Ferroptosis

Focus Biomolecules recently launched a set of compounds which are know to selectively inhibit one of the four programmed cell death types described above.

If you are interested to confirm a hypothesis that cells are undergoing a certain response due to the “hypothesized” mechanism – these inhibitors can be of great help to you!

Any questions or comments? Please use the form below!