Measure antioxidative capacities of your samples 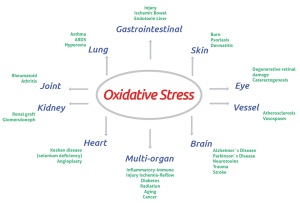 It has been shown that the excess of ROS production might lead to inflammation, premature aging disorders, and several disease states. This includes cancer (1), Parkinson’s and Alzheimer’s diseases (2,3), atherosclerosis and heart failure (4), autism (5), and diabetes (6).

Living organisms have developed complex antioxidant systems to protect themselves from oxidative stress. However, an excess ROS can overwhelm the systems and cause severe damages. Therefore, it is valuable to measure either the antioxidative capacity of biological samples and/or the antioxidant activity of naturally occurring or synthetic compounds for use as dietary supplements, topical protection, and therapeutics.

Methods to measure the antioxidative potential/capacity

A number of methods are used to measure the antioxidative potential of biological samples (DPPH, TEAC, ABTS, ORAC, TRAP, FRAP…).

Here, I’d like to present two state of the art methods, one using a fluorescent approach and another one using an absorbance based read-out.

Both methods can be just as well used to assay the antioxidant activity of naturally occurring or synthetic compounds.

The ORAC antioxidant assay measures the loss of fluorescein fluorescence over time due to peroxyl-radical formation by the breakdown of AAPH (2,2.-azobis-2-methyl-propanimidamide, dihydrochloride).

The ORAC assay is a kinetic assay measuring fluroescein decay and antioxidant protection over time.

Trolox  is used as a positive control inhibiting the formation of the radical cation in a dose dependent manner. The antioxidant activity in biological fluids, cells, tissues, and natural extracts can be normalized to equivalent Trolox units to quantify the composite antioxidant activity present.

Where can you find these methods?

Zen Bio offers both methods under a user-friendly and ready-to-use format (ORAC Antioxidant Assay Kit & ABTS Antioxidant Assay Kit). It’s of interest to note that these ORAC & ABTS measurements are also available as Anti Oxidant Screening Laboratory Services, for those who do not have access to resources or the equipment to run such assays in their own lab.

Feel free to leave a message in this post, I will be more than pleased to help you find the most appropriate ROS measurement assay!