During my daily discussions with researchers involved in in vitro iPS and Embryonic Stem cell cultures, I am always amazed by the passion that drives them. However, the more I go in depth with them in their protocols to optimize them, the more I realize that “time and money” are very tricky points when cultivating these cells. This can be summarized by a simple question: How can I optimise my media to cultivate Stem cells with stable and cost-effective Stem Cell Factors?

In other words, what are the most economical recent advances in Stem Cell research allowing high quality culture without spending my week-ends feeding my Stem cells ?

Recently, a new technology based on “Stabilized” Stem cell Factors has been developed. These growth factors are encapsulated in biocompatible microspheres (Polyesters of Glycolic and Lactic Acids or PLGA beads). These “beads” allow sustained release of the Stem cell Factors into your media of choice, thus creating a more stable environment for your cells.

StemBeads FGF2 steadily release growth factor into the media, thus enabling you to reduce the feeding frequency of your stem cell cultures to bi-weekly.

Culture with FGF-2 StemBeads and biweekly feeding produces a more undifferentiated hESC culture than traditional daily feeding. hESCs grown one month on MEF feeders exhibit a similar FACS stem cell profile when fed with FGF-2 StemBeads in medium every third day compared to soluble FGF-2 in medium daily. NANOG expression was significantly increased and the diffeerentiation markers SOX17 while Brachyury were significantly reduced, by qRT-PCR (left panel). Normal Karyotypes for hESCs were assessed before expansion and then after 1 month of expansion in either soluble FGF-2 or FGF-2 StemBeads, and neither showed abnormalities. Immunostaining of month old cultures shows similar appearance of colonies and expression of the pluripotency markers OCT4 and NANOG in both conditions, Scale = 50 microns. Source: StemCulture and Lotz et al. (20123, http://dx.doi.org/10.1371/journal.pone.0056289). Note: Similar results obtained with hESCs grown on Matrigel (BD). 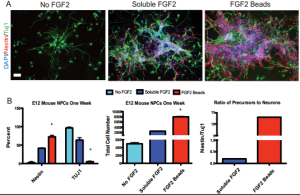 Activin-A is used sometimes to maintain pluripotent stem cells or to differentiate them to different lineages (ex. endoderm). While soluble Activin-A is degraded in culture after 12 hours of culture, StemBeads Activin-A releases a constant rate of Activin-A into your culture media. Data have shown that this Activin A release lasts for over 5 days, thus creating a more stable environment for Stem cell cultures.

These EGF StemBeads offer you the same reliability and flexibility as FGF2 and Activin A StemBeads. EGF is a growth factor that stimulates proliferation of various cell types and Stem cells. EGF StemBeads stabilize EGF leading to optimal cellular performance.

As these have only recently been released, I have not yet been able to collect user’s comments, but I have found some convincing data to show you that EGF StemBeads are genuinely efficient!

Convinced that StemBead technology will save you time & money in your Stem Cell research?

To get started with StemBeads, contact our experts in cell culture, Stem cell and cell reprogramming approaches at europe@tebu-bio.com ! 3 solutions for optimal cryopreservation of mammalian cells and tissues